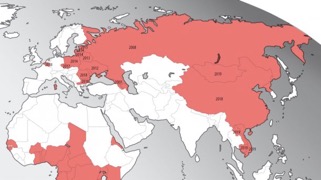 A group of swine professionals will describe their field experience and perspective gained while fighting against African Swine Fever.

Our industry is facing a global threat due to the spread of the African Swine Fever virus (ASF). As the experiences with the disease grow, we at the 333pigsite wanted to collaborate as much as possible with industry professionals to share their perspective on managing the challenges. This article is the first of a series that will describe the field experience and perspectives gained while fighting ASF. Our interviewed swine professionals include an international production consultant, veterinarians from the Baltics and Poland, and a reference laboratory specialist based in Russia. Let’s learn from their different experiences and perspectives.

All four of our swine specialists agreed that this is a very worrisome moment for the swine industry. Mr Corns, a North American consultant, that is now based in Europe, has been working for more than 10 years across the EU, Asia (mostly China), and Russia. He advises large vertically integrated customers on production and biosecurity. Mr Corns rates ASF as the number one problem in these regions. He quoted his colleague Dr. Adrian Balaban from Romania who said that, at this point, "you don’t have to be infected to be affected by ASF". He highlighted his concern that the focus on addressing ASF has changed from a regional to a global scale.

Dr Cepulis is an experienced swine vet. consultant with customers in the Baltic countries of Lithuania, Latvia and Estonia and parts of Belarus. He highlights that his clients perceive the disease as a major threat that can quickly lead their farms to bankruptcy. At the same time, he highlights that backyard farmers and hunters are not very concerned with the spread of the disease. In his opinion, the key to the epidemiology and prevention of the disease in this heavily forested region of the EU is the control of wild boar population. He also pointed out that, in Estonia, professional hunters were able to decrease the wild boar population significantly and they did not experience any domestic swine outbreaks last year. In Lithuania and Latvia , during the same time period, the hunting was conducted by non-professional hunting clubs and the subsequent numbers of wild boar remain high. He thinks that the risk of ASF for domestic pigs in Lithuania and Latvia is higher as a result of this difference.

Dr Karbowiak is a member of the biggest swine veterinary clinic in Poland. Even though he also perceives ASF to be the most important problem in his country, they “don’t panic about the disease anymore” like they used to 3 years ago with the first outbreaks in his area. With clients in Poland and Ukraine, he visits a big range of farms, from back yard producers, with no more than 30 sows, to large facilities that may house up to 3000 sows. He is used to dealing with the consequences of having nearby outbreaks. He is the only practitioner in his clinic that has diagnosed an outbreak in a finishing facility. The goal of his clinic is to continue to keep all their clients free of ASF even though the virus is present and active in his country.

Our final specialist is Dr Kolbasov who is the current director of the Russian reference center for ASF research and diagnostics based in the Vladimir region central part of Russia. Since 2007, Dr. Kolbasov has been directly involved in the diagnostics and investigation of all outbreaks reported in Russia. His ASF experience includes wild boars and also a wide range of industry segments including all types of swine farms, processing plants, and slaughter plants. He also agrees with the significant importance of this disease, which also carries the nickname of "trade disease". He notes that the level of concern in his region will depend on how dependent the region is on trade - “If the region is not interested in the external market, unfortunately, this will not be a concern for those swine producers”- says Dr. Kolbasov. On the other hand, he sees ASF as a good indicator of the real farm biosecurity level. He is proud to say that producers have learnt a lot and improved from this experience. He explained to us that the lack of ASF outbreaks in certain areas has been used as an indicator of biosecurity improvements and, consequently, as a good indicator of the overall health improvement of Russian swine herds.

Except for Mr. Corns’ Chinese experience, all the regions represented by our swine specialists were initially affected due to outbreaks in wild boars. However, the event that was responsible for the transmission of the virus into commercial outbreaks varied between these regions.

Dr. Karbowiak shared that the main event responsible for moving the disease from wild boars on the border of Belarus, 3 years after it was first detected in wild boars, was the illegal movement of pigs. This movement transmitted the virus into commercial facilities that were 100 km away and, consequently, the virus spread between farms from the North to South of Eastern Poland towards the Vistula River (a highly concentrated wild boar area).

Having worked in Russia since before ASF entered the country in 2007, Dr. Kolbasov has many years of experience and he can describe in detail the initial chain of outbreaks in that country. These outbreaks started in the Chechnya region (i.e. the low swine density border region with Georgia) in 2007, and then jumped to the North Ossetia region of Russia affecting many commercial farms. His experience "tells him" that, when the virus gets into commercial farms it is not difficult to eradicate the disease from the area. However, the problem gets more challenging in regions where there is a high density of backyard farms that may occupy many hectares and frequently have lower biosecurity standards. Dr. Cepulis agrees with this epidemiologic scenario and the role of wild boars. He describes summers as the worst season for ASF transmission between domestic backyard production and wild boars in the Baltic countries.

Finally, Mr. Corns points out the difference in the epidemiology of the disease in China and Romania. In China, there is not a significant number of wild boars playing a part in transmission and very large commercial facilities with high biosecurity are being infected. In Romania, there is a combination of wild boars, backyard farms, and large systems that are all being infected, and this combination is making the control of the disease one of the most difficult in EU. He highlights that carrying out a proper outbreak investigation on every case has been very valuable for their clients to identify biosecurity gaps.